‘Do not cut a tree that provides shade in a desert’. ‘Cleanliness is half of faith’. ‘Even if a dog dies thirsty at the banks of Euphrates it is my responsibility’. All of the above are quotes found in Islamic history. These quotes were uttered for the benefit of society, and the environment as a whole. These quotes were not uttered in isolation, but as a dialogue with the people, as a ‘Mukalama’.

However, in recent times it seems that the Islamic nation or Ummah or even the population living in Muslim majority nations have forgotten such dialogues and actions. It has been replaced with a robotic delivery of rituals, whereas interaction with our surroundings, adaptability with our environment, and sustainable compatibility is key. The Islamic ecology is fast depleting and all that remains is theology.

It is for this reason that the ‘Eco-Islam Conference’ hosted by DW (German Media Channel), Wahid Foundation (Indonesian foundation), and T2F (Pakistani Not For Profit) with the aim of promoting a Mukalama and an exchange between Muslim countries such as Pakistan, Indonesia, Bangladesh etc. is important. The name Eco-Islam itself is quite important as it urges that we need to build upon the foundations of Islamic ecology. The quotes above were said several centuries ago, but do they have any relevance today? Yes!

In a water parched city such as Karachi where frequent heat waves are experienced, it is an absolute disgrace that we continue to cut down more trees than we plant. The birds have fled, and now even the humans cannot find shade where they can breathe freely. Similarly, now it is not just animals that die, in the 2014 heat wave, 2000 humans died as well.

We also continue to talk about cleanliness, but do we practice it as half of faith? No. As is obvious in Karachi with the ongoing trash crisis. Plus, we can further look into essential tenets of faith such as ablution. We continue to waste huge amounts of water in it, while there is an option to do ‘Tayammum’ where we can use clean sand to purify ourselves. So need to ask ourselves that in a water parched city like Karachi, should we not start doing Tayammum in Mosques?

Speaking of Mosques, Indonesia boasts of an Eco-Mosque, where ablution water is recycled. I believe it is time that we move several steps further and install solar panels and green roofs in our mosques. Most of our mosques are large enough to do so. There are small individual efforts here and there, but it is time that a more directed effort is made to make Mosques environmentally friendly so that they can set an example.

However, the exchange did not only focus on religious rhetoric. Its tagline is a very prominent ‘Love Humans, Love Nature’. While, Islam does teach us the same, it is a message for every human being on Earth. Nature can survive without us, but we definitely cannot survive without a habitable nature. As Nietzsche once said ‘God is dead and buried in temples and churches’. And if we do not take care of our environment soon, the human race might get wiped out and Nietzsche’s quote might as well come true: If there are no humans left, the Mosques, Temples, and Churches will be without worshippers.

The Conference in Jakarta was interesting and groundbreaking for several reasons. There were environmentalists, journalists, solution providers from Pakistan, Bangladesh, Indonesia, and Germany that came together in order to exchange ideas as well to pledge to work together towards future. We also got together and visited an Islamic boarding school where we had conversations with the students. We encouraged the students to look after their environment by planting trees in the school’s courtyard.

Indonesia was represented by many environmentalists such Ms. Agustina Iskander, who lead millions of peoples at the ‘World Clean Up Day, Indonesia’. Ms. Zannuba Ariffah Chafsoh, Director of the Wahid Institute as well as an Islamic Activist and politician also shared her thoughts.

Pakistan was represented by Mr. Tofiq Mooraj Pasha and I. Mr. Arieb Azhar, Director of the T2F and an accomplished musician, is the one who brought us all together for this conference on Pakistan’s end. Mr. Pasha, as we all know, is a renowned environmentalist and horticulturalist actively pushing for sustainability for almost 4 decades, while my humble contribution thus far has been in the sustainable waste management industry for the last 3 years and an organizing role in the Climate March 2019. Arieb and Pasha have also led the ‘Maa Dharti’ program at T2F, in which I have participated as well over the course of the last year.

The overall diversity of the group and geographical representation shows this was a very well thought out and organized conference. Pakistan, Bangladesh, and Indonesia, are some of the most vulnerable countries to the effects of climate change. These are also Muslim majority nations. Hence, a conversation about Eco-Islam is very necessary in these places to bring awareness to the masses in order to get more and more people to help protect our future.

The second half of the conference will be happening in Karachi, Pakistan in the third week of November 2019. The representation is expected to be even more diverse and the goal is to keep the dialogue and Mukalama alive. I for one think this combined effort will go a long way towards shaping a sustainable future. I hope we continue to ‘Love Humans, Love Nature’ for eons to come. 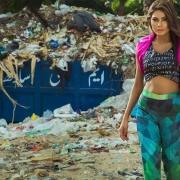 An Exclusive Interview With Arieb Azhar: The In Tune Environmentalist
0 replies

Why we need to think differently about packaging

Journeying Into Zero-Waste
Scroll to top