This week, we had the opportunity to interview Arieb Azhar, a well-established musician in Pakistan and now Director at popular community space, T2F (The Second Floor). Having lived in Croatia for 13 years, Arieb is a melting pot of musical and artistic influences, which is why we chose to talk to him about his efforts around enabling environmentalism in Pakistan. Read on for his interesting insights into the topic. Q: Do you consider yourself an environmentalist? Why or why not?

A: I absolutely do, there’s no doubt about it. Perhaps the only reason why I don’t go around saying I’m an environmentalist is because I believe that the present day movement to save the environment and the planet is a holistic movement that is connected with everything else. In today’s world, if you are a humanist, you must be an environmentalist because it has the potential to galvanise all the challenges that humanity is facing. It is clear to everyone that unless we change the way we function, the world is surely going to be destroyed.

Q: How do you think music has helps enable efforts around environmentalism?

A: Music and art are not simply about raising slogans. Genuine art is about connecting with society around you on a humanistic level. The journey of an artist starts by imitating those that inspired you, then you progress and ask yourself “who am I in all of this?” then your art starts becoming interesting and innovative. Great music can touch people from alien cultures because you’re speaking about universal issues.

Q: That reminds me of your documentary, the Indus Blues. How do you think the instruments along the Indus riverbank were developed and what was the impact of the environment?

A: As we know, civilisation began around rivers and water sources. So when we were doing this documentary and covering the endangered musical instruments of Pakistan, what we realised is that when you lose a musical instrument it’s not just that, you lose a whole metaphorical language that goes along with it – a sensibility that connects you with your culture. What we see in the documentary is not a natural evolution, it’s a forced extinction. Climate change has caused many communities to become impoverished, which left artists unable to sustain themselves, so the environment definitely had a role to play.

Q: Do you think as a celebrity and as a well-known figure that people follow, you have the responsibility to speak on environmental issues?

A: I don’t do what I do because I consider myself a celebrity, I think everyone has a responsibility to speak up.

Q: Why do you think a majority of celebrities and influencers choose to remain silent about important humanistic issues?

A: It’s the mainstream industry, it always caters to the lowest common denominator and doesn’t like causing too many controversies. These influencers want to have as many followers as possible so they don’t want to talk about issues that might result in a loss of fans. Up until now it was considered to be ‘uncool’ to voice these issues but now it’s becoming ‘uncool’ to remain silent!

Q: What has been your main inspiration behind the Maa Dharti Project?

A: I knew that the purpose of a music festival is not just to provide entertainment, but to add deeper value so that it’s also entertaining your mind and heart. It’s to gather a community around certain ideals where they can lose themselves in something beyond themselves. Since traditional melas have been diminishing, we need to provide those spaces with a freedom of expression in our urban centers.

Maa Dharti came about when I shifted from Islamabad to Karachi in May 2018. I hadn’t lived in Karachi since the 80’s, so when I moved here from very beautiful, green cities including Croatia, I realised how barren Karachi is – the lack of trees, clean air, the congestion. So I wanted to kickstart something through T2F to address this problem. After joining forces with Tofiq Pasha, we came up with a series of 12 panels on talks ranging on various topics. I believe we succeeded in sparking a debate and unifying it by bringing it on a single platform.

Q: What do you think is the greatest barrier in communicating about topics like the environment with the greater public? Have you had any negative experiences?

A: No, I haven’t had any negative experiences. Perhaps the only thing was that some of these Maa Dharti sessions weren’t too well-attended, so maybe people don’t realise the importance of it as much as they should. I don’t think people are anti-environmentalists, it’s just that people in Pakistan have had one heartbreak after the other for so many decades in terms of political unrest, crime and corruption; which has made people cynical about positive change. So you just have to walk the extra mile to assure them that things CAN change.

Q: Having lived in Croatia and Karachi, what are some similarities that you have witnessed between the East & West, in regards to environmental challenges?

A: Now that Croatia has opened up to the free market economy and capitalism, it means that big corporations want to muscle their way in – same thing has been happening in Pakistan. Previously in both places, small businesses used to flourish and grow locally – which is a form of a sustainable economy – but with the arrival of multinational corporations and international brands, there comes mass production and consumption which is disastrous to the environment.

A: More and more people are realising that something needs to change. We’re living in a period where people like Greta Thunberg and other representatives of the youth are leading this change. This translates as a rebellion against the old, which is surely a double-edged sword.

Q: Considering that the T2F is seen as an open space, was the topic ‘Eco-Islam’ just as welcomed? Do you plan on hosting anymore events around the topic?

A: I do plan to hold more events. It took me a few days to get my head around the concept, but then it dawned on me that it’s such a great idea. I think this is the role religion plays; it teaches us about humanist moral values and ethics. So in a country like Pakistan where Islam is all-pervading, it is possible to find empathy and consideration for humanity as a whole. To connect that with the environmental debate was a stroke of genius, and gave me the opportunity to connect with religious scholars too.

Q: Lastly, what are your goals or ambitions as a musician in Pakistan?

A: My personal ambition is to produce more music and perform more when i’m given the opportunity to, but musicians in Pakistan are choosing to leave the industry because it’s not very sustainable and the scene here is very small. I could develop and continue my career in some other country, but since i’m connected to Pakistan, I will always retain this. Using my other skills, I would like to continue developing platforms that address this situation like Music Mela Islamabad, Art Langar, Creative Karachi, Maa Dharti and more. Arieb Azhar and I engrossed in conversation. Notice the metal straw in the empty glass of juice.

We thank Arieb Azhar for his time, valuable input and all that he does for this city! 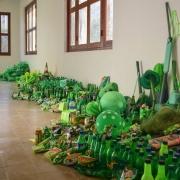